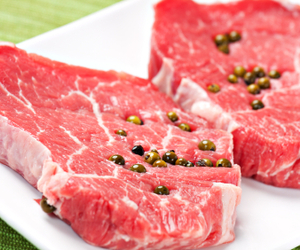 It's long been known that athletes and bodybuilders benefit a great deal from protein supplements in conjunction with workout routines. Beef protein isolate is just one of the sources from which these individuals get their needed protein levels.

Beef protein isolate is one of the newer protein isolates on the market and is competing directly with whey protein isolate for the dominant position. There are fans and critics of both, yet there doesn't seem to be any clinical evidence to suggest one is better or worse than the other.

Beef Protein Isolate Has Benefits For Athletes WebMD lists all of the benefits of protein realized by the human body. The list is extensive, but most important to athletes is the fact that it is the foundation of muscles and bones. Without proper protein it would be nearly impossible f... more

WebMD lists all of the benefits of protein realized by the human body. The list is extensive, but most important to athletes is the fact that it is the foundation of muscles and bones.

Without proper protein it would be nearly impossible for an athlete to build muscle mass and endurance. Beef protein isolate can help with these important components in athletic competition and success.

Protein is one of the "holy grails" of supplements aimed at the athlete demographic. The only debate that remains is which sources of protein are the best. Is it beef protein isolate? Soy protein isolate? Milk or whey?

The Argument For Beef Protein Isolate

Supplement makers specializing in formulas for athletes continually argue over which type of protein isolate is better. On the one hand, those who favor beef protein isolate claim that it is more concentrated and provides more amino acids than any other form.

Proponents of beef protein isolate also use historical evidence of beef consumption to bolster their claims. They cite the fact that bodybuilders have been known for generations to be ravenous beef consumers.

They claim the human body naturally craves this type of protein thereby making it superior to whey protein isolates and other protein sources. This thinking is obviously misleading, as there could be any number of reasons why individuals prefer beef.

Many sources reference longstanding medical knowledge regarding proteins, amino acids, and their effects on exercise and bodybuilding. When the scientific data is examined at face value it becomes clear that all the hype surrounding a beef protein isolate is just that- hype.

The same can be said for those who push whey protein or soy protein has the best source of protein for bodybuilders. It is all marketing hype designed to sell supplements. The FDA does not approve beef protein isolate supplements or the claims they make, so be sure to do your research and choose a reputable manufacturer.

By the same token, supplement makers favoring one type of protein isolate over the rest will often knock the other forms of protein isolates. They’ll claim the other types don't offer as much concentrated protein, they add fat and cholesterol, or they are not readily absorbed by the body.

A perusal of bodybuilding forums across the net shows that beef protein isolate is quickly gaining a fairly significant fan base. Many users report that it is helpful to their exercise routines, easy to mix up, and tastes fairly decent. There are users who even claim that it is more productive for their workouts than any other type of protein isolate.

It must be noted, that there are an equal number of proponents of other types of protein on these same bodybuilding forums. Anecdotal evidence is not enough to say, for a fact, that beef protein isolate is superior.

As a beef protein isolate becomes more popular it is showing up in more and more supplements. You can find the supplements on the internet at dozens of sites, at your local health food store, and at quite a few gyms and fitness centers. Prices will vary from roughly $25-$40 for a 2 lb. can of powder.

Ultimately, the decision as to whether beef protein isolate is the best source of protein will be left up to the individual consumer. You should always consult a physician or professional trainer before taking any new supplements, including beef protein isolate, as a high-protein/low-carb diet does pose dangers of its own.