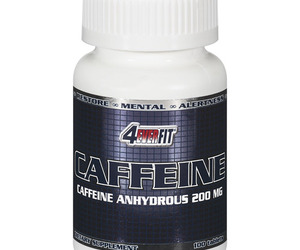 Many may wonder if caffeine anhydrous is safe, if it is just like drinking coffee, or if it is similar to drinking an energy drink. Caffeine anhydrous is basically a supplement like any other, such as whey protein, vitamin c, or creatine. It not only is a real substance that is used daily throughout the world, but it also is a supplement given to help users have a rush or hype.

Caffeine anhydrous has been used as a supplement for dieting, as a workout boost, or even for mental awareness. This supplement is a dehydrated form of coffee, therefore it can be taken as a pill or powder.

Caffeine Anhydrous and What its Name Means This supplement is basically caffeine in the form of a pill. The simplest and easiest way to explain the supplement is by imagining a cup of coffee has been transformed into another type of orally ingested product.  Anhydrous means “without wa... more

Caffeine Anhydrous and What its Name Means

This supplement is basically caffeine in the form of a pill. The simplest and easiest way to explain the supplement is by imagining a cup of coffee has been transformed into another type of orally ingested product.

Caffeine Anhydrous Side Effects and Concerns

Caffeine anhydrous and its range of supplements is considered to be safe. You need to remember, however, that is only if caffeine supplements are used in moderation!  Anyone who has a sensitivity to coffee or chocolate should be wary of taking this product.

Many people may drink three sodas in the span of three hours and not be in danger. However, if someone consumes three caffeine anhydrous pills in three hours, their body may not be able to handle it.

Too many of the pills, however, can cause jittery and shaky habits, and inability to sleep or stay focused. If you do not eat while taking these pills over the course of the day, your body will begin to experience side effects. Food needs to be consumed as on a regular basis with this pill or you will feel nauseous and uncomfortable.

Yes. Caffeine anhydrous, like coffee or other caffeine products, increases the body's metabolic rate and the levels of energy within the body. Therefore, if someone takes a caffeine anhydrous pill an hour or two before they work out, they will be increasing their metabolism. They will also have more energy to exercise longer.

Just as caffeine or a cup of coffee typically curbs an appetite, the caffeine anhydrous pill can work with the same effect. Although one should not substitute the pill for a meal, it can help you feel satisfied with smaller portions.

Caffeine anhydrous is also proven to have a moderate diuretic effect. This will allow your body to get rid of excess fluids frequently through urination.

Caffeine anhydrous is also proven to work hand in hand with dieting, exercise and athletic performance. If the caffeine anhydrous pill is taken before a long workout, it is typically shown to last through the entire time—proving enhanced performance as well.

Although the athlete may feel extremely tired after a long day of exercise, this pill will still increase their performance. Use the free supplement finder to locate caffeine anhydrous products now!