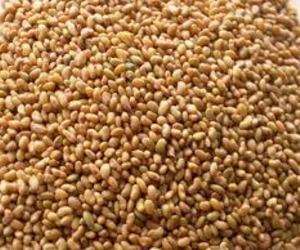 Alfalfa is a plant in the Fabaceae pea family and is actually the most cultivated legume worldwide. It is also called lucerne and as lucerne grass. Though naturally occurring, alfalfa is also sold as a supplemental product. Alfalfa’s leaves, sprouts and seeds can all be exploited for various health benefits.

Alfalfa is commonly recommended as herbal treatment for people interested in lowering their cholesterol. Studies have shown that alfalfa seeds have lowered total cholesterol as well as LDL or low-density lipoprotein levels.

Alfalfa leaves, sprouts, seeds and other extracts are also recommended for kidney problems, asthma, arthritis complications, diabetes symptoms and even prostate and bladder problems. Though alfalfa is less studied in these areas than it is for cholesterol treatment, it is still considered an all-around health herb. The idea behind alfalfa is that it prevents cholesterol absorption from within the gut.

Alfalfa's Role In the Body Alfalfa has actually been used in herbal treatments for over 1,500 years of human civilization. Ingesting of the herb has been recommended as treatment for digestive tract problems and kidney problems. Why such positive effects? Alfalfa has some mysteriously bene... more

Alfalfa's Role In the Body

Alfalfa has actually been used in herbal treatments for over 1,500 years of human civilization. Ingesting of the herb has been recommended as treatment for digestive tract problems and kidney problems. Why such positive effects? Alfalfa has some mysteriously beneficial effects on the digestive system.

Experts theorize that its beneficial effects are due to the plant’s deep root system. This means that it can better absorb minerals from the soil than most other plants. It operates as a mild diuretic (increases urine flow) and contains natural plant estrogens.

It also contains eight essential amino acids (in the leaves) and has properties that alkalize and detoxify the human body. The plant can help clean the liver, fight fungus and help develop pituitary gland function.

Alfalfa is not a drug regulated by the FDA. It is sold in capsule form, tablet form and in liquid extract. There is no standard recommendation for any particular type of treatment. The average dosage could by anywhere from 250 mg to 1,000 mg. Naturally, the more you want to lower cholesterol, the higher dosage you would take.

Doctors and nutritionists recommend that you break down high dosages into smaller dosages, about three times a day (served with a full meal). It can also be taken in leaf form, through dried leaf, or even as steeped strained tea. (About 10 ml of extract with 25% alcohol)

Because alfalfa is a plant proven not to be poisonous, there are no known short-term side effects to worry about. All studies suggest that when this plant is taken by healthy people, only positive benefits result. Nevertheless, there are possible interactions that could occur with certain medications and other herbs.

Mixing alfalfa in your system with warfarin, certain birth control pills and other estrogens, and some immune system medications like azathioprine and cyclosporine could also cause some negative interactions and compromise the treatment. Alfalfa will have no interactions with a regular diet.

Possible Side Effects of Alfalfa

Alfalfa has no notable short-term side effects besides increased sensitivity to sunlight. However, some studies have indicated that long-term alfalfa use could increase the risk of an autoimmune disease known as lupus erythematosus. Long-term use of the plant could also increase and exacerbate immune system activity, which leads to conditions such as multiple sclerosis (MS), lupus and rheumatoid arthritis.

In essence, alfalfa does what many other drugs do, since it is rich in a variety of ingredients. Double the dosage (with the alfalfa plant now in your system) could put some patients at risk for various diseases and conditions. There has also been some study done on the ingredient canavanine, which is inside the plant, and may cause interference with immune system functions. Therefore, most doctors recommend that only healthy people take alfalfa and that the treatment be relatively short-term, until a superior diet could be implemented.

If you are facing a critical crossroad in your life and need to lower your cholesterol fast, then alfalfa may be a solution for you. While alfalfa has shown promise in multiple avenues of medical science, because of a few long-term risks, most doctors will only recommend the herbal treatment for a select period of time. Ultimately, a change in diet will be necessary for long-term cholesterol reduction.

In the meantime, alfalfa continues to be a popular plant and medical wonder throughout the global community. You can find alfalfa leaves, liquid extracts and seeds in local and online supplement stores.  Use the free supplement finder to find alfalfa now!