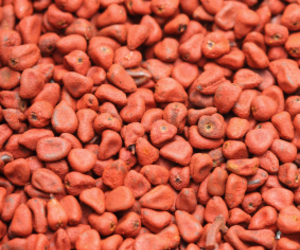 Annatto is extracted from the seeds of the achiote tree which grows in tropical regions of the American continent and in the Caribbean islands. Annato is often referred to as achiote, urucum, or roucou.

Annatto is used in dietary supplements and foods for its color and sweet yet mildly spicy flavor. It is often used to replace the more expensive spice saffron.

When used as a nutritional supplement, annatto can provide many benefits for your general health and wellbeing. Although side effects of taking annatto supplements are mild, studies have shown that annatto dyes used to color foods can cause an allergic reaction in some individuals.

Benefits of Taking Annatto Supplements Annatto does provide nutritional benefits as a supplement. Annatto supplements are often taken to fight indigestion, heartburn, and digestive problems. This is due to the properties in annatto which reduce acid in the digestive tract. Annatto ... more

Annatto does provide nutritional benefits as a supplement. Annatto supplements are often taken to fight indigestion, heartburn, and digestive problems. This is due to the properties in annatto which reduce acid in the digestive tract.

Annatto has been studied for its side effects. In fact, annato has been linked to food allergies when used as a natural coloring.

The natural food coloring produced from annatto is usually yellow, orange, or red and can be found in cheese, meats, rice, butter, margarine, candy, popcorn, and ice cream. It will be listed under ingredients as either annatto or dye E160b.

According to About.com, an allergy to annatto may manifest as the skin becoming red, itchy, or flushed. Other signs of an allergic reaction to annatto include difficulty breathing, coughing, and runny nose.

An intolerance to annatto can be determined if there is stomach discomfort, nausea, or diarrhea. Sensitivities to food colorings like annatto can affect an individual’s behavior or mood.

Food sensitivities to annatto can also result in migraines, aches and pains in the body, or lethargy. Common side effects of taking annatto supplements include bloating, gas, and occasional diarrhea.

Be sure and consult with a medical professional before beginning any supplement use. Although each manufacturer varies in their recommendation of annatto supplements, 100 milligrams daily is the average recommended dose.

It is also recommended to discontinue use of annatto supplements two weeks prior to surgery.

Annatto and the Food and Drug Administration

You can find and compare annatto supplements by using the free supplement finder now!