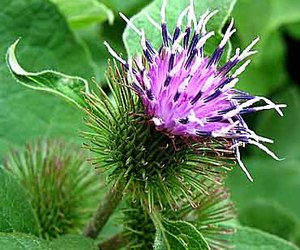 Burdock is a member of the thistle family. These plants can grow up to 28 inches in height and are notable because of the presence of prickly heads, known as burrs. The burrs attach themselves very easily to the clothing or fur of any person or animal that happens to walk close to the burdock.

This plant is found in Europe, Northern Asia and North America. It grows as a weed in these parts of the world, and is grown domestically in Japan and some part of Europe as a vegetable. The supplement form of burdock is sold around the world.

The burdock has purple flowers that are in bloom between June and October. This plant's leaves are heart-shaped and are green on their surface and whitish on the bottom. The roots are used for medicinal purposes, and this part of the plant is a dark brownish-green or black color.

Burdock Uses and Benefits Burdock has been used for hundreds of years to treat many ailments. Traditionally, it has been used to clean toxins out of the bloodstream. It is also prized for its diuretic properties, which help the body rid itself of excess fluid by increasing urine production... more

Burdock has been used for hundreds of years to treat many ailments. Traditionally, it has been used to clean toxins out of the bloodstream. It is also prized for its diuretic properties, which help the body rid itself of excess fluid by increasing urine production.

Burdock has also been used to treat skin ailments, such as acne, eczema and psoriasis. It is also one of the ingredients that is used in traditional Chinese medicine; burdock can be combined with some other herbal ingredients to treat colds and sore throat. Extract of burdock root is an ingredient that is used in a number of herbal preparations, as well as homeopathic remedies.

In parts of the world where burdock is cultivated, it is eaten as a vegetable. This plant contains insulin, which is a natural dietary fiber. It has been used as a way to improve digestion.

Some studies conducted recently have found that burdock has prebiotic properties. Prebiotics are foods that are not digestible, but which help keep the "good" bacteria in the digestive tract healthy. Other sources of prebiotics in the diet are whole grains, fruits and vegetables.

Burdock roots are available in fresh or dried versions. This type of supplement can also be bought as a powder, or in a liquid form. Consumers can choose from decoctions, which is a liquid made by boiling down the herb in water, or tinctures, which are solutions made up of the herb in either alcohol or water and alcohol.

Adults can take burdock in the following formulations:

Burdock is also available in a topical preparation for eczema and wounds.

Before you start taking burdock or any other herbal supplement, discuss your plans with your doctor. They can trigger side effects in some people and interact with herbs, supplements or medications that you may be taking. Rather than start taking burdock on your own, a safer and healthier choice is to use it with the knowledge and under the supervision of your health care provider.

When taking burdock as a supplement, it's best to limit the amount used to lower the risk of interactions or an allergic reaction. It is considered a safe option when eaten, although it's important to be conscious of the herb's diuretic effect.

Make sure that you are buying burdock from a reputable dealer. This plant's roots have a similar appearance to belladonna or nightshade and you want to avoid the risk that what you receive has been contaminated by these other, potentially poisonous, plants. Do not go out to gather burdock in the wild yourself as a way to save money. You could end up doing harm to yourself instead. Instead, use the free supplement finder now!