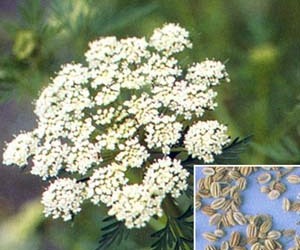 Cnidium monnieri is a plant that has been used in Chinese medicine for centuries. It is an annual that that has white flowers that grow in clusters. The seeds of this plant are a yellow color and have a sweet smell.

This plant is native to China and it is commonly found growing at the edge of fields or in ditches. Cnidium also grows in Russia, Mongolia and Korea. The herb has been introduced to Europe and the United States as a supplement as well.

The benefits of cnidium monnieri cover many areas that include skin conditions, fungi and sexual potency. Read more to learn about the extensive uses, drawbacks and dosing recommendations of this plant.

Cnidium Uses Cnidium has traditionally been used as a treatment for skin conditions. This product is commonly sold in bulk in Chinese pharmacies, as well as health food stores. It has been used to deal with the symptoms of eczema and acne. This plant is also used as an aphrodisiac. Researc... more

Cnidium has traditionally been used as a treatment for skin conditions. This product is commonly sold in bulk in Chinese pharmacies, as well as health food stores. It has been used to deal with the symptoms of eczema and acne. This plant is also used as an aphrodisiac. Research has found that Cnidium has a number of helpful properties, including:

Now Cnidium seeds are used to treat skin conditions, such as rashes and itchiness. It is still used to treat eczema and acne. They can also be used as a treatment for ringworm.

The seeds of the Cnidium plant can be taken orally to treat vaginal infections and itching and to improve sexual potency. When combined with other herbal remedies, it can be used to treat impotence and infertility. Research conducted on animals points to Cnidium as a substance that build strong bones.

Cnidium Monnieri is a substance that increases nitric oxide release in the body. As a result the levels of cGMP (Cyclic Guanosine Monophosphate) are raised. cGMP is a necessary component for a man to successfully achieve and maintain an erection.

This substance helps the muscles surrounding the man's penis to relax. When this occurs, the vessels supplying the penis are able to take in more blood, which in turn helps him to become fully erect.

As an aphrodisiac, Cnidium is said to increase stamina and give the user a higher level of sexual energy. The sex drive increases with use, and users report being able to experience more intense orgasms.

Men and women can use Cnidium as a libido booster. It has the same effect on a woman's genital region as a man. The clitoris is made up of the same erectile tissue as a man's penis, and a product that increases blood flow to the area can help make it easier for a woman to achieve orgasm. Increased blood flow can also provide a more intense and satisfying experience for her as well.

Cnidium Monnieri and Working Out

Cnidium is used by bodybuilders before working out. They find that it helps them to increase their performance and it decreases recover time after using weights for strength training.

It also works on the veins in the body to create a pumped look where the muscles are prominent after the bodybuilder has finished working the weights.

The standard oral dose for Cnidium is between 6-15 grams or one capsule daily. It should be taken with food. Before using this product, be sure to read the instructions on the packaging carefully and follow them precisely. Bodybuilders take 100-200 mg daily, either as a single dose or taken twice a day.

To treat skin conditions, Cnidium is available in a topical ointment that is spread directly on the affected area. It can also be used in the form of a solution that is applied to the area being treated. The seeds can also be used to prepare a douche to treat vaginal infections.

When taken at the recommended dosage, Cnidium is considered safe. It should not be taken by people who are also using croton seed, peony root   or fritillaria.  The seeds of this plant can be taken orally safely; however, the essential oil is not meant for internal use unless done under the supervision of a doctor.

Anyone who is using blood thinners should check with his or her doctor before starting to take Cnidium. Pregnant or nursing women should not take this herb unless they are directed to so by a physician. Patients who have liver or kidney issues should also check with their doctor before taking this medication.

Some people who have used Cnidium have reported episodes of vomiting or diarrhea. Some users have also reported muscle contractions or spasticity while using the herb.

Exceeding the recommended dose can be quite dangerous. At higher doses, this herb has been liked to seizures and convulsions. Some users have experienced difficult or labored breathing.

When taken in the right dosage, cnidium monnieri has many practical benefits that include muscle recovery, sexual potency, healthy skin and more. You should always let your physician know what supplement you are taking and aim for good nutrition and exercise on a regular basis. To find the best nutritional supplements for your individual needs and goals use the free supplement finder now!