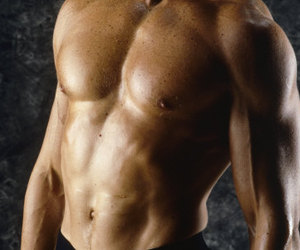 Creatine has been used widely as a dietary supplement  for bodybuilders because it has many strength training benefits. While there are other methods to deliver creatine as a supplement, the most commonly found formulation comes in the way of creatine monohydrate.

The body has the ability to produce small quantities of creatine through our every day nutrition; however, most of the time it is beneficial to supplement its production. Creatine is found primarily in meats, but it is nearly impossible to achieve the results that most people look for when using creatine if you are only getting it through your regular diet.

You can learn about other creatine supplement combinations on the nutrition page. However, the following article details the benefits, side effects and dosage amounts for creatine monohydrate.

Creatine Monohydrate Benefits Creatine in general is used for a variety of different reasons, almost all pertaining to building muscle. There has been a lot of controversy over its use in the past because it has the potential to help people gain large amounts of muscle mass in a relatively... more

Creatine in general is used for a variety of different reasons, almost all pertaining to building muscle. There has been a lot of controversy over its use in the past because it has the potential to help people gain large amounts of muscle mass in a relatively short amount of time.

It has been observed to yield positive results by way of building fuller looking muscles. This is opposed to leaner, smaller muscles that say, a runner would develop through their workouts. It has the ability to do this because creatine causes the muscle to retain larger amounts of water and fluid.

Creatine also has been proven to increase stamina and aid in all around performance. For instance, muscles will be able to respond and recover much quicker when the diet is being supplemented with creatine monohydrate.

Generally, people who already have lower levels of creatine in their body naturally due to their diet will respond much quicker to the supplementation of creatine monohydrate. For instance, if you were to eat almost an entirely vegetarian diet you would likely notice results much sooner than someone who only ate steak every day. This is an extreme example, but it hopefully gets the point across!

There have not been any bad side effects associated with the use of creatine so far. In fact, it is considered a relatively safe supplement to use as long as you stay within the suggested dosage.

Most people should expect to have a few minor gastrointestinal reactions within the first month of adding an increased amount of Creatine to their diet. For instance, bloating and diarrhea are very commonly observed for a short duration – both of which can cause cramps.

Most should expect to see a small increase in weight gain as well once they start their new regimen. This is because there will be a much larger amount of water retained by the muscles.

There are quite a few different ways to take creatine monohydrate as a dietary supplement; it is manufactured in a variety of forms. For instance, you can take it as a pill, dissolving tablet, powder or a liquid.

Many athletes will use a method called “loading” to get creatine into the body at sufficient levels to see fast results. For this, it is recommended to take around 25 to 30 grams of creatine every day for about a week. After that you should taper the dose down to roughly 5 grams. Because the body stores creatine you do not need to maintain such a high dose.

Some people prefer to just start at a low dose and maintain their supplementation at that level the entire time. This is also perfectly acceptable. It is completely a personal choice as to what time of day you want to take it; however most athletes choose to take it before their workout routine.

It is up to you to decide how you would like to take creatine monohydrate. Most of the different forms are comparable to each other and it just depends on which method is easiest for you. The dosage you take will depend on what results you would like to see and of course how quickly.

Creatine Monohydrate has been known to aid in putting on muscle mass, quickly, for many years. In fact, quite a few body builders swear by its results.

However, this does not mean that you should assume that your body will not react adversely to the supplementation of creatine. Thus you should see a physician before you begin a new dietary supplement of any kind.

Keep in mind that there are other ways to obtain creatine through different foods as well. Because of this, you should always tell your doctor what your typical diet consists of so that you are taking the proper doses of creatine monohydrate. Always remember to get your supplements for a reputable source. Start with the handy supplement finder, now!