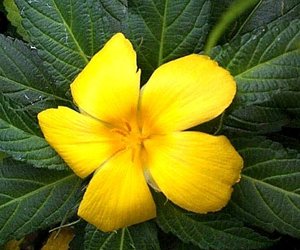 Damiana is a very common dietary supplement used in many places around the world. However, if you're having trouble thinking of it as a nutritional supplement for physical fitness or athletic performance, there's a good reason: the supplement is normally sold as a libido enhancer for both men and women.

Damiana has been used extensively in South America specifically for this purpose for generations. It is quite frequently sold as a Mexican liqueur which, as legend has it, was the original Margarita.

Damiana comes from a small shrub known scientifically as turnera diffusa. Turnera diffusa thrives in hot and dry conditions, so it is frequently found and southwestern states like Texas and Arizona, as well as Mexico and many central and South American countries.

The shrub produces aromatic flowers that are usually appreciated simply for their beauty, followed by a summer fruit that is said to taste a lot like figs. But it is the leaves of the shrub that are used to make Damiana tea.

Damiana Studies Although a Damiana has been widely used as an aphrodisiac in Mexico and Central America, it didn't become popular in the United States until the 1970s. At that point researchers began investigating claims about its libido enhancing properties. In the more than 30 years sinc... more

Although a Damiana has been widely used as an aphrodisiac in Mexico and Central America, it didn't become popular in the United States until the 1970s. At that point researchers began investigating claims about its libido enhancing properties. In the more than 30 years since, several studies have produced results that seem to be favorable to those claims.

Although nothing has been clinically proven in human beings, tests have shown increased sexual activity among lab rats given the substance. What's most intriguing about the studies is the way the substance was used. The first method was to feed sexually exhausted lab rats moderate doses of Damiana to see how they would react.

In both cases the rats were observed to be participating in more frequent sexual activity. As a side note, researchers also observed that impotent male rats exposed to Damiana were more likely to become sexually active than those who were given nothing. The studies seem to suggest that persistent Mexican myths about Damiana as an aphrodisiac are really not myths that all.

Damiana: How it Works

There is no conclusive research to say exactly how Damiana may work as an aphrodisiac. However, there are two things that researchers believe may play important roles. The first is the fact that the substance is classified as an aromatase inhibitor.

Aromatase inhibitors prevent estrogen from being synthesized in fatty tissue, thus reducing estrogen levels in the body. In men, that allows for higher testosterone levels which in turn, can cause sexual excitement. In women, this forces the ovaries to produce more estrogen to counteract the losses, thus encouraging sexual activity in them as well.

The second thing researchers are looking at comes by way of a chemical compound in the shrub known as damianin. This compound is known to help relax the central nervous system in both lab rats and animals. It is believed that the combination of the relaxed nervous system and the reduced estrogen levels combine to promote sexual arousal.

Although Damiana has been used safely as an aphrodisiac for centuries, there are some concerns over its proper use from an ethical and moral standpoint. Strangely enough, the shrub and all of its associated extracts, compounds, and salts are prohibited in the state of Louisiana.

It's not clear if the substance is illegal or regulated in other states but that is certainly a possibility. According to information from the state of Louisiana the thinking behind making this a prohibited substance is to protect innocent individuals from being sexually abused. The FDA has not issued any official guidelines for this supplement.

Used as an aphrodisiac, Damiana’s most common form is a tea with sugar added. There have been some reports of people smoking the leaves but there's no confirmation that doing so has any benefit.

As a side note, Damiana tea has also been associated with relieving constipation and several other gastric disorders. Making a mild tea from the leaves is said to alleviate gastric distress and bring balance to the digestive system. These claims are largely anecdotal and have not been clinically proven.

Looking for a sexual performance enhancer? Use the supplement finder now!