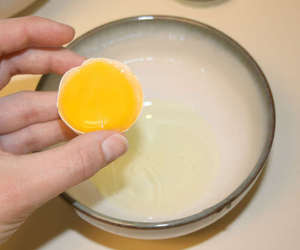 Most people are familiar with the health benefits of the egg white, or egg albumin. It’s a good source of protein and, unlike the yolk, has very little fat and cholesterol.  You’ll find liquid egg whites suitable for use as a dietary supplement in the refrigerated section of many supermarkets.

The egg albumin’s main purpose in the development of a chick is to supply it with nutrition and provide protection. This is why the egg albumin is so rich in protein, vitamins and minerals.

There are over 40 different types of protein in the egg albumin.

Egg Albumin Types of Protein Although the egg albumin has so many different types of protein, a few are the most effective. Ovalbumin is a protein that provides nourishment and binds digestive enzymes, and it makes up over half (54%) of the protein in egg albumin. Ovotransferrin (12%), ovo... more

Although the egg albumin has so many different types of protein, a few are the most effective. Ovalbumin is a protein that provides nourishment and binds digestive enzymes, and it makes up over half (54%) of the protein in egg albumin. Ovotransferrin (12%), ovomucoid (11%) and globulin (8%) are the next top three.

Each protein has a specific purpose. Overall, these proteins aid in the digestive process, bind cells, boost the immune system, or perform a combination of these tasks.

The egg albumin is made mostly of water and accounts for over half the weight of an egg. The rest of the egg albumin’s mass consists of nutrients. In addition to having most of the egg’s protein, it contains magnesium, riboflavin, potassium, sodium and niacin.

Minerals such as zinc, phosphorus, copper and calcium are also found in egg albumin. These help strengthen fingernails, bones and teeth. In addition, the egg albumin is rich in vitamins B6, B12 and D.

Unlike many other foods, the egg albumin loses little nutritional value when cooked. There are about 17 calories in the white of a large egg.

Egg Albumin Can be Eaten Many Ways

The ways to eat egg albumin are numerous. You can fry them, scramble them or make an omelet, with or without the yolk. Boiled or poached eggs are always good and if you only want the egg albumin, the yolk is easy to remove once they are cooked.

Many recipes call for egg albumin. Baked goods, such as cakes and pies, have egg albumin or whole eggs in them. You can even make your own healthy eggnog using egg albumin.

Some people drink raw or liquid egg albumin which they get from raw eggs. Although raw egg whites are nutritionally good for you, they can have the deadly bacteria salmonella in them.

A safer option is drinking the prepackaged liquid egg albumin. It has the same nutritional value as raw egg albumin but is pasteurized, a heating process that kills salmonella. Liquid egg whites can be drunk alone or mixed with something like chocolate syrup to add flavor.

Another way to consume egg albumin is to have it in a powdered form. Scientists have found a way to extract the water from the egg albumin to make egg white powder. There are many advantages to having egg albumin powder.

In the powdered form, you won’t need to deal with the raw egg albumin or worry about contaminating other materials because the dehydration process kills salmonella. Also, if you only want to eat the egg albumin, the yolk can’t go to waste because it’s not there.

Dried egg albumin lasts much longer than fresh egg whites do. It can be stored at room temperature and has a shelf life of about a year when opened. A sealed container of egg albumin can last anywhere from five to ten years.

You can use the dried egg albumin any way you would use fresh egg whites. Egg albumin is good to make protein shakes with, added in recipes, or simply cooked and eaten. Egg albumin is easy to reconstitute, just add water.

People who are allergic to eggs should not eat egg albumin. The symptoms of an egg allergy include a stuffy nose, hives, allergic asthma, nausea, vomiting and cramps.

Some people have a more serious reaction and develop anaphylaxis, which makes it impossible to breathe. Anaphylaxis must be treated with a shot of epinephrine or the person will die.

Some people have an intolerance to egg albumin. The symptoms can be similar to an egg allergy, but they only appear when the person eats egg whites that are not cooked in the same way. For example, someone might be able to eat a cake made with egg whites because it was baked, but the same person may show symptoms after eating fried eggs.

Egg Albumin and Other Health Concerns

Although the egg albumin has many nutrients, eating too much can be detrimental to your health. Over consumption of egg whites can lower your blood levels of vitamin B7, which can cause rashes, pink eye, hair loss, depression, hallucinations and other neurological symptoms.

Too much egg albumin can also cause you to have gas and be constipated. If you are on a low sodium diet, you should not eat too many egg whites. One egg albumin has 400mg of sodium.

Eggs may contain salmonella. This is killed by cooking eggs thoroughly, but you must be careful to not spread raw egg anywhere while preparing your meal. Uncooked egg can contaminate other foods and surfaces with salmonella.

Preparing and eating egg albumin might pose some dangers. However, if you are careful when cooking them and don’t eat too many, you should have no problems.  The good news is that egg white products are subject to FDA regulations, so you can be assured that there is quality control.

Despite the possible health concerns, egg albumin seems to be one of the best sources of protein out there. In addition to its nutritional value, egg albumin is very versatile. You can cook and eat it or pour some in a glass and drink it on the go.

For more information about egg albumin, use the free supplement finder on this website.