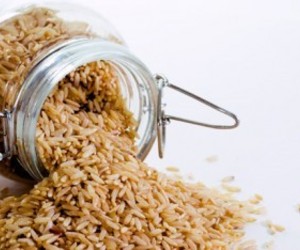 Drawn from the oil of rice bran, including ferulic acid and sterols, gamma oryzanol is a mixture of substances. In Japan, gamma oryzanol has been utilized for conditions ranging from stomach upset to high cholesterol, as well as anxiety and menopause.

In the United States it is even used as a dietary supplement for bodybuilders and exercise enthusiasts. In addition, it is used to reduce levels of cholesterol in the blood. There is no research evidence; however, that gamma oryzanol actually is a true benefit for any of the above conditions.

The main source of gamma oryzanol is rice bran oil. However, it is found in other foods as well, including grains, herbs and spices, and many vegetables and fruits. In order to receive enough in doses that are truly therapeutic though, you need to add dietary supplements to your list, as well.

500 milligrams per day of Gamma Oryzanol is considered a typical dose.

Gamma Oryzanol Benefits According to recent studies, rice bran oil seems to improve cholesterol levels, as with many other types of vegetable oil. Research suggests that the gamma oryzanol found in rice bran oil tends to lower cholesterolmore than fatty acids. For some reason, it seems to ... more

According to recent studies, rice bran oil seems to improve cholesterol levels, as with many other types of vegetable oil. Research suggests that the gamma oryzanol found in rice bran oil tends to lower cholesterolmore than fatty acids. For some reason, it seems to work by absorbing cholesterol found in the digestive tract in the body.

Gamma oryzanol also seems to have antioxidant characteristics. The hypothesis is that cancer, heart disease, as well as other illnesses, can be combatted with antioxidants. However, it is important to bear in mind those larger studies that look for the benefits of antioxidants such as vitamin E and beta-carotene, have not returned the most positive conclusions.

Additionally, gamma oryzanol is also utilized by many athletes and weight trainers who have read reports which suggest that it increases performance, not to mention muscle growth. Many websites report that gamma oryzanol increases hormone levels (testosterone, anabolic, and growth) and in order to produce such benefits.

There is no real evidence, however, that it affects hormones or tends to enhance the performance of a workout. One double-blind study, for example, demonstrated that the consumption of 500 mg per day of gamma oryzanol over a period of nine weeks did nothing to affect levels of performance or hormone levels.

There is some evidence that gamma oryzanol might be able to help prevent an ulcer in animal studies. However, human studies are few and far between. This does not mean that it does not work, just that there has not yet been sufficient study.

In addition, Gamma Oryzanol is also used to treat symptoms of menopause in some cases. However, evidence that it is truly effective is too weak to rely on significantly. One study involved rats that were injected with Gamma Oryzanol. Apparently, it actually was found to alter the level of a luteinizing hormone (LH).

Because the LH levels were altered, it may be able to help alleviate symptoms of menopause; however the effects found in rats is a far cry from the work that would be to be done to be certain that it would actually work in humans as well. One ongoing study states that they have direct evidence that gamma oryzanol truly benefits menopausal symptoms. However, there is no control group, which does little to validate the study.

There is always the risk of a contamination. For example, in the late 70s one batch of rice bran oil was actually found to be contaminated by polychlorobiphenyls, or PCBs. This led to more than 2000 people being poisoned, which in turn led to safety studies on all products containing gamma oryzanol.

In all fairness, however, other investigations have found that when gamma oryzanol is taken in normal doses, it is found to be both noncarcinogenic, as well as nontoxic.It is important to realize, however, that a maximum safe dose prescribed for women were pregnant or nursing, children, and the elderly have not actually been established yet.

The same holds true for those individuals who were suffering from liver or kidney damage. Also, if you have thyroid issues you should avoid this supplement. If you decide to take it, stay within the recommended dosage levels, be aware of your body's reaction, and keep your doctor informed.

Gamma oryzanol is a substance that comes from an oil of rice bran. It has been utilized as far away as Japan for treating everything from stomach issues to menopause symptoms. Here in the United States, it is used as a dietary supplement for bodybuilders. Unfortunately, few studies have been completed that demonstrate its success as an exercise supplement.

Future studies could well prove the benefits of gamma oryzanol in some of all of the areas listed above. However, there are many other supplements on the market, like creatine for performance enhancement, that have more research to back up their claims. Compare your options by using the supplement finder and the informative articles on the nutrition page, now!