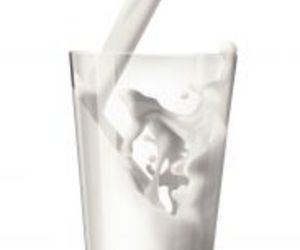 Glycomacropeptide is a substance derived from milk and created during the process of cheese manufacturing. It may be beneficial for the treatment and prevention of prevalent diseases, such as tooth decay and cardiovascular disease.

Foods made with glycomacropeptide provide protein and could contribute to weight loss. Adding glycomacropeptide to foods and drinks that harm teeth may counteract the negative effects. These foods could be particularly appealing to people with phenylketonuria (PKU).

According to FitnessforWorld.com, glycomacropeptide is present in 10 to 15 percent of whey, another by-product of cheese manufacturing. Whey contains protein, peptides, fat, water, salts and lactose. It is sold often sold as a protein supplement.

Glycomacropeptide is high in sialic acid, which may play a role in healthy digestive function, protection of the small intestine from infections and healthy brain development in newborns. Pure glycomacropeptide supplements are available as well as supplements mixed with whey protein concentrates.

Supplementing with glycomacropeptide may reduce risk of cavities, help fight off bacteria and viruses and elevate levels of cholecystokinin, which is a substance the stomach secretes to regulate satiety, or the feeling of being full, according to FitnessforWorld.com. It may also be beneficial for gout and people with a condition called phenylketonuria (PKU).

Glycomacropeptide may be effective for treating gout, according to an article publishing in the "Annals of the Rheumatic Diseases" journal. Gout is a type of arthritis caused by a build up of uric acid in the blood that results in joint inflammation.

The study tested the effects of a skim milk powder with added glycomacropeptide on gout flare ups. After three months, the group taking the powder enriched with glycomacropeptide experienced significantly fewer flare ups than before. The participants also reported decreased pain.

Glycomacropeptide may also help decrease risk of cardiovascular disease, which is the number one killer of Americans. According to an article published in the "American Journal of Clinical Nutrition".abstract in June 2008, glycomacropeptide stimulates the release of the hormone cholecystokinin, which is associated with satiety.

The study explored whether a whey powder enriched with glycomacropeptide could lead to weight loss and decreased markers of cardiovascular disease compared with taking a skim milk supplement.

However, results showed that after one year, the whey group lost between 8.8 and 9.9 kilograms compared with 7.4 to 10.8 kilograms from the skim milk group. Although the glycomacropeptide-enriched whey protein did not show greater reductions of weight than the skim milk powder, participants did lose weight.

Glycomacropeptide could play a role in preventing tooth decay and cavities. Dental caries, also known as tooth decay, is the most prevalent chronic disease worldwide, according to an article published in the "Lancet" journal in January 2007.

People can develop this disease at any time in their lives. Dental caries occurs over time as acid-producing bacteria and fermentable carbohydrates interact near teeth and saliva.

A news bulletin released by Professor Laurence J. Walsh of the University of Queensland in Australia states that caseinphosphoproteins have anti-carogenic properties, meaning they inhibit the formation of dental caries.

Glycomacropeptide is the only dietary protein that is naturally low in phenylalanine. People suffering from phenylketonuria (PKU) may benefit from eating glycomacropeptide; PKU is a rare condition present at birth that makes it impossible for people to correctly break down the amino acid phenylalanine.

An article published in the Winter 2007 issue of "National PKU News" states that Dr. Mark Etzel of the Department of Food Science at the University of Wisconsin-Madison developed a process to lower phenylalanine in glycomacropeptide to only 0.2 grams of the amino acid per 100 grams of glycomacropeptide powder.

The low levels of phenylalanine in glycomacropeptide makes it a potential source for protein for people with PKU. The focus of research reported in the "National PKU News"  article was to determine if glycomacropeptide can replace the amino-acid based medical foods given to PKU patients.

Researchers at the Department of Nutritional Sciences and Center for Dairy Research of the University of Wisconsin-Madison received a grant from the National Institutes of Health to conduct human clinical trials. In addition to discovering if glycomacropeptide is safe for PKU diets, the studies also wanted to determine the effects of glycomacropeptide on levels of phenylalanine in the brain and blood, plus discover if the foods made from phenylalanine would taste good.

The study included PKU patients ranging from 8 to 30 years of age. Only five subjects had completed the program at the time of publication, but showed favorable results. The participants were asked to eat a diet consisting of their regular medical foods with the standard amounts of phenylalanine for four days. They were then given a diet that included glycomacropeptide products as their dietary protein sources.

Researchers measured levels of phenylalanine in the participants' brain tissue and blood along with their glucose levels, protein levels and liver function after the four days of medical foods and four days of glycomacropeptide products.

No adverse effects were seen from switching the patients' diets, suggesting that glycomacropeptide may be a suitable replacement for PKU diets.

A variety of foods can be made containing glycomacropeptide. The Food Applications Laboratory at the Wisconsin Center for Dairy Research on the University of Wisconsin campus has manufactured a range of foods and drinks with glycomacropeptide, such as:

Cambrooke Foods has also made a granola-like snack bar containing glycomacropeptide. According to the "National PKU News", people with and without PKU liked the taste of the foods, especially the puddings. More food products are being developed.

These foods show promise as protein substitutes in PKU diets, though a better purification process to reduce phenylalanine even more is being researched.

Find other supplements with our free supplement finder and compare prices on supplements from mutliple online merchants to save you time and money.