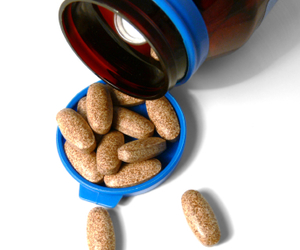 You may have seen huperzia serrata as an ingredient in a supplement you want to take or are already taking. You may be wondering what it is and what it is good for.

Huperzia serrata has only started popping up in commercial herbal supplements in the last 20 years. It is used for a variety of treatments. The two most common types of supplements containing huperzia serrata are memory improvement and muscle building supplements.

The History of Huperzia Serrata Usage They have been using huperzia serrata for centuries in traditional Chinese medicine. The most common aliments they used it for were fevers, inflammation, and blood disorders. Scientists discovered that huperzia serrata had an impact on brain functi... more

The History of Huperzia Serrata Usage

They have been using huperzia serrata for centuries in traditional Chinese medicine. The most common aliments they used it for were fevers, inflammation, and blood disorders.

Scientists discovered that huperzia serrata had an impact on brain function in the late 1980’s. It is currently being studied in the United States as an alternative treatment for Alzheimer’s disease and epilepsy.

Many memory enhancing supplements on the market contain huperzia serrata as part of their blends. Studies have shown that it increases nerve activity in the brain.

When huperzia serrata made its way to the U.S., scientists discovered an alkaloid in the plant known as huperzine A. This alkaloid has been proven to boost the levels of acetylcholine in the brain by surpassing the production of acetylcholinesterase.

Acetylcholine is a primary neurotransmitter in the part of the brain that controls memory. According to the University of Texas, neurotransmitters are responsible for making connections by bridging the synapses between neurons. Our bodies are able to make acetylcholine on their own, but as we age less is produced.

The increase of acetylcholine has been shown to help increase short term memory, concentration, and learning ability. This makes it ideal for memory boosting during stressful times.

Studies have also shown that huperzia serrata may help people with Alzheimer’s disease. Alzheimer's disease is a form of dementia that gets worse over time. It affects memory, thinking, and behavior. It can also cause problems with speech, decision-making, judgment, and personality.

While Alzheimer’s cannot be cured or reversed, huperzia serrata shows promise in slowing the degeneration of the brain. Some studies showed that it may work better than conventional medications.

Research has been done on the use of huperzia serrata to reverse the damaging effects of brain injuries. While studies are promising more trials still need to be done to be sure of long term effects.

Other Possible Uses of Huperzia Serrata

Muscle building supplements may contain huperzia serrata. It improves the signals between muscle nerves and muscle cells. This provides more muscle contractions to improve overall muscle tone. They also use it because it improves concentration, mood, and energy.

Studies are being conducted on the use of huperzia serrata to treat myasthenia gravis. The Mayo Clinic says that the cause of myasthenia gravis is a breakdown in communication between nerves and muscles. It is characterized by weakness and fatigue of voluntary muscle groups.

Huperzia serrata has diuretic properties as well. It can reduce swelling from water retention and alleviate the pain it causes on joints.

Many herbalists believe it may help with other conditions such as erectile dysfunction and menstruation related problems.  Studies are also being conducted at Harvard Medical School on huperzia serrata’s efficacy in treating epilepsy.

Side Effects and Drug Interactions with Huperzia Serrata

Because huperzia affects the nervous system, Web MD says you should consult a doctor before taking if you have any of the following conditions. Huperzia serrata can aggravate these conditions.

You should also not take huperzia serrata if you take atropine, scopolamine, antihistamines, or antidepressants. It may decrease effectiveness of these drugs.

Huperzia serrata may increase the side effects of glaucoma and Alzheimer’s medications. Always consult your doctor before taking anything if you have a preexisting medical condition.