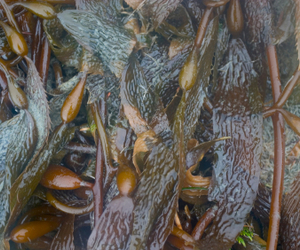 Irish moss is a seaweed called Chondrus crispus that is found in the coastlines of the northern Atlantic. Irish moss is common in countries such as Iceland, Ireland and England.

Irish moss is most generally used as a food additive. It is not a health supplement.

Irish moss is one of the sources for carrageenan, a gel-like substance that is used to thicken foods and other mixtures. It does not have any nutritional value.

The History of Irish Moss It is believed that inhabitants of Carragheen County in southern Ireland first began harvesting Irish moss from the shoreline during low tide 600 years ago. They used it as a fertilizer in the soil, in medicine and in food. It was also called carrageen, which is I... more

The History of Irish Moss

It is believed that inhabitants of Carragheen County in southern Ireland first began harvesting Irish moss from the shoreline during low tide 600 years ago. They used it as a fertilizer in the soil, in medicine and in food. It was also called carrageen, which is Irish for “rock moss.”

Irish immigrants recognized the Irish moss growing in the cold waters off of the Massachusetts shoreline. Irish moss is actually found in most shorelines of the northern Atlantic, including Canada.

The Irish also called it mathair an duilisg, or mother of the dulse. Dulse is another seaweed that is used as a food source in the same areas as Irish moss.

Irish moss is mainly used to as a source for the gel carrageenan, which is then used as a thickening agent in recipes. A common Scottish or Irish recipe calls for Irish moss to be boiled to release the gel.

The gel is collected, and then sugar and other ingredients such as spices or alcohols are added to it, creating a Jell-O-like concoction.

Carrageenan is used in manufactured food products to thicken or stabilize the ingredients. It is also used as a vegetarian replacement for gelatin, which is made from the hides and bones of animals.

Irish moss is also used in the beer and wine-making processes to promote clarity and flavor. The Irish moss is added to the fermenting mixture.

During fermentation, the Irish moss draws undesirable impurities and organic compounds to itself. The Irish moss and the attached compounds settle at the bottom of the beer or wine barrel, leaving the beverage clear.

Other Uses of Irish Moss

The carrageenan from Irish moss is also used in medicines and mixtures such as antacid gels and drugs for ulcers. It is also found in toothpaste, lotions and moisturizers, gel air fresheners and water-based paints.

There are also studies underway on carrageenan’s use as a personal lubricant that can lower the risk of contracting sexually transmitted diseases. A 2007 study referenced on Web MD indicated that carrageenan reduced the contraction rate of Human Papillomavirus (HPV).

Irish moss’s carrageenan was part of a study in the early 2000’s which showed that ingestion of high levels of the gel by animals led to ulcers and cancer. The Joint Expert Committee on Food Additives (JECFA), a worldwide group of independent scientists working under the World Health Organization restudied carrageenan.

JEFCA’s findings were that the original study was flawed, and that carrageenan was safe for use in the small amounts found in foods. It was, however, recommended to be removed from infant formulas and baby foods.

Side Effects of Irish Moss

The FDA maintains rating carrageenan and Irish moss as GRAS, or Generally Recognized As Safe.  It is a level three GRAS rating, which means that the GRAS substance is only safe when taken at normal levels.

Allergies have been reported with ingested and topical use. Symptoms include upset stomach, nausea, rash, burning and itching.

Anyone experiencing severe allergic reactions, such as dizziness or difficulty breathing or swallowing, should seek medical attention immediately.

New medications, supplements or diets should be discussed with a medical professional before beginning. Women who are pregnant or nursing should not take Irish moss or carrageenan.

Web MD asserts that people who are taking medication for high blood pressure should not take Irish moss or carrageenan. Dangerously low blood pressure could result.

Those who have stomach or digestive issues such as ulcerative colitis or Crohn’s disease should not take carrageenan as it can make the symptoms worse.

Carrageenan, due to its gel-like consistency, can slow the absorption of many orally ingested drugs. Discuss the use of carrageenan with a doctor if you take any important medications.

How to Use Irish Moss

Irish moss is sold in its dried form. It is then boiled to remove the carrageenan.

Carrageenan can also be purchased as a powder or gel to be used in recipes or mixtures. Follow the manufacturer’s recommendations.

Looking for Irish moss? Use the supplement finder to discover sources right now!