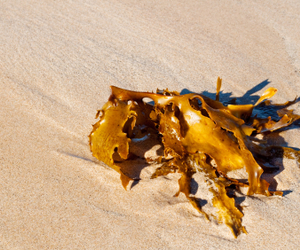 Kelp refers to a large group of large, brown seaweeds found in oceans and seas all over the world. It is used in a number of ethnic cuisines and diets.

Kelp is extremely high in nutrients, minerals, and iodine. It is considered by many to be a superfood.

Kelp is also used as a weight loss aid. Kelp is often an ingredient in nutritional supplements and may be used in some medical procedures. Kelp also has great promise as a biofuel.

The History of Kelp Kelp has been collected by many different cultures for centuries. It is a main ingredient in many Japanese, Korean and Chinese dishes. Scottish peasants burned kelp to make soda ash, or sodium carbonate. Culinary Uses of Kelp Kelp is high in iodine, iron, calciu... more

The History of Kelp

Kelp has been collected by many different cultures for centuries. It is a main ingredient in many Japanese, Korean and Chinese dishes. Scottish peasants burned kelp to make soda ash, or sodium carbonate.

Kelp is high in iodine, iron, calcium, potassium and other vitamins. It is used like a vegetable in many cultures, in soups and stews, or as a garnish to add flavor.

In Korea, it is traditional to eat a kelp soup on your birthday. This soup is also given to women who are pregnant or have just given birth.

You may see kelp packaged as granules or flakes or as dried sheets or fronds. Kelp is also sold in supplement form at your local health food store.

Other Uses of Kelp

Kelp is also used as a fertilizer, and it is used in the process of making soap and glass. Like many other seaweeds that are harvested by man, a gel-like substance can be extracted from the kelp organism.

Called alginate, this gel is used in many products as a thickener, solidifier and as a gelling agent. It is found in jellies, tooth paste, ice creams and dressings.

Kelp may help those looking to lose weight! A 2010 study performed by Newcastle University showed that the alginate from kelp kept the body from absorbing fat.

Because of the fiber in the alginate, 75% of the fats in foods in an artificial stomach were not absorbed. Testing continues to assess the use of kelp as a weight loss aid.

Kelp as a Sustainable Biofuel

An article in Biomass Magazine reported that the Scottish Association for Marine Science (SAMS) believes that large kelp farms off the coast of Scotland could be used as a source for biofuel. Biofuel is a fuel that is created naturally through the carbon cycle and creates no or little pollution.

The brown kelp could also be used to derive ethanol, which can also be used as a fuel. One of the biggest draws of using brown kelp to produce energy is that kelp farms are not taking up land that is needed to grow food.

WebMD reports that kelp is used in some medical procedures performed on women. Kelp is used as a “tent” to keep the cervix open in order to induce abortion.

Kelp is also used for medical procedures such as inserting a cancer treatment or medical device, and to bring about labor.

The gel-like substance extracted from the kelp is also used in the dental impressions used by dentists to make plaster molds of the teeth. It is also a common ingredient in many heartburn medications.

However, the Mayo Clinic adds that iodine deficiency is rare in industrialized nations because iodine is commonly added to salt. Too much iodine is dangerous as well, causing the thyroid to malfunction.

Side Effects of Using Kelp

Those who are allergic to shellfish may experience a reaction as many crustaceans make their homes in seaweed.

There are also those who have a sensitivity or allergy to the iodine in kelp. Anyone experiencing rash, swelling, itching, burning, dizziness or the inability to swallow or breathe should seek immediate medical attention.

Those with the rare conditions dermatitis herpetiformis or hypocomplementemic vasculitis should not use kelp because of an increased risk of iodine hypersensitivity. Anyone who has impaired kidney function or a malfunctioning thyroid gland should not use kelp.

Kelp is high in potassium, making it dangerous for anyone who has high potassium levels due to a condition or medication. Those who take digoxin, ACE inhibitors, potassium supplements, thyroid hormones or water pills should not use kelp.

Women who are pregnant or nursing should consult their physician before adding kelp supplements to their diet. A doctor and pharmacist should be consulted before beginning any new medication, supplement or diet.

To locate and compare kelp products, use the supplement finder today!