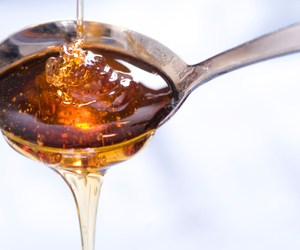 Malitol syrup closely resembles sugar. It has both advantages and disadvantages when compared to sugar and other artificial sweeteners.

How Maltitol Syrup is Made

Because maltitol syrup is so close to sugar, it is used as a substitute in many sugar-free foods. Malitol syrup is used in sugar free hard candies, sugarless gum, and ice cream.

Malitol syrup is also used in confectionary chocolates such as sugar-free chocolate Easter bunnies. It is even found in low-calorie or diet cookies, cakes and other desserts.

Maltitol syrup tastes very similar to sugar as opposed to other sugar substitutes. It adds bulk to food, just like sugar, and it also adds texture like sugar. The syrup can be crystallized to resemble the cubed nature of sugar, but it does not caramelize, or brown, like sugar.

This makes maltitol syrup unsuitable as a replacement for sugar in some recipes. The syrup can also be powdered to resemble confectionary sugar.

Another positive that the syrup has over sugar is that it does not cause decay to the teeth like sugar does. Any form of sugar or starch will cause and increase cavities; maltitol syrup does not, as it is not sucrose or starch.

In 1999, the American Dental Association released a statement supporting sugar-free foods and chewing gums in an effort to fight the formation of cavities. They did so since it was not sensible or feasible to ask Americans to stop eating food.

According to the Calorie Control Council, maltitol syrup is nearly 90% as sweet as sugar, but it has about half the calories. The calories are also not all absorbed due to maltitol’s slow absorption rate. This makes it useful for those who are trying to reduce calories in their diet, such as weight watchers and diabetics.

However, maltitol syrup is not a calorie-free sugar substitute. It still has calories which will affect blood-glucose levels for diabetics and dieters alike.

It is a common occurrence to eat more of a product because it is labeled “diet,” “low calorie” or “sugar free.” Often, the person ends up consuming more calories of a low calorie food than if they were eating a normal serving of a full calorie food.

Other Uses of Maltitol Syrup

Maltitol syrup is also used as a sweetener in non-food applications. It is found in toothpaste, mouthwash and different medicine formulations. Maltitol syrup is the spoonful of “sugar” that helps the medicine go down without adding undue calories.

Maltitol Syrup as a Laxative

High consumption of foods containing maltitol is not recommended by the Mayo Clinic, as it has laxative properties when taken in large quantities. Eating over 50 grams of maltitol would be considered a large amount.

For some people, a modest intake of only 10 grams can induce the discomfort associated with laxatives. As it is a common sweetener in candies and chocolates, children are especially prone to get too much maltitol syrup in their diet.

The U.S. Food and Drug Administration (FDA) labels maltitol syrup as GRAS, or Generally Recognized As Safe for all applications. However, the FDA does recommend that the dosage stay below 100 grams a day.

Those who have consumed a large amount or are sensitive to maltitol may experience abdominal pain, gas, bloating and diarrhea due to the laxative effects of the syrup.

Anyone who is starting a new vitamin, supplement, diet change or medicine should first consult with a doctor and pharmacist.

Somone with digestive issues such as Irritable Bowel Syndrome, Crohn’s disease or other digestive disorders should probably keep ingestion of maltitol syrup to a minimum as it has different effects on the digestive tract that may exacerbate certain digestive disorders.

Diabetics or anyone on a low calorie diet should speak with their health care professional before using large amounts of maltitol syrup in their diet. Women who are pregnant or breastfeeding should not use products with maltitol syrup as an ingredient because of its laxative effect.

How to Use Maltitol Syrup

Maltitol syrup is sold in crystal, powder and syrup form. Follow the manufacturer’s dosing instructions. Pay attention to your own reactions to maltitol syrup so you know how much is too much for you.

Maltitol syrup is also available in many low-calorie, diet or sugar-free foods. Follow the serving size suggested in the nutritional facts.

Are you putting together a low calorie diet to complement your workout regimen? Use the free supplement finder to locate products containing maltitol syrup!