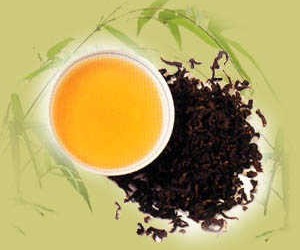 Oolong tea is a Chinese tea product that comes in a wide range of varieties based on the plants used and the production and fermentation processes employed. Oolong (also known as Wu Long) teas can vary in flavor from sweet and fruity to woody, to green and herbal. Among experts in the Chinese tea culture, oolong is perhaps the most exquisite and sought-after of all teas.

The name "oolong tea", in English, is derived from a loose translation of the Chinese name, which literally means black dragon tea. Regardless, oolong products are enjoying increased popularity as nutritional supplements in the western world. Asian cultures, on the other hand, have been using oolong for centuries as a means of maintaining good health. It is also used in many religious observances.

For ceremonial purposes in China and Taiwan, a special brewing method known as gongfucha has been developed. This brewing method produces the more potent tea required of many ancient religious practices.

Oolong is so highly revered in Asian cultures that in China and Japan there are tea masters who specialize in its many varieties. These tea masters can distinguish one oolong from the next in the same way an experienced wine taster can distinguish between various vintages. And just as there is an entire subculture devoted to wines and wine tasting, the same can be said for oolong tea in many oriental cultures.

Oolong Tea Benefits Oolong teas are often promoted by the weight loss industry as fat burning teas. Some of the ingredients in oolong have been linked to increased metabolism and good digestive health, two of the key components for successful weight loss. The tea is often served in Chinese... more

Oolong teas are often promoted by the weight loss industry as fat burning teas. Some of the ingredients in oolong have been linked to increased metabolism and good digestive health, two of the key components for successful weight loss. The tea is often served in Chinese restaurants either just prior to, or just after, the main meal; the idea being to promote full and complete digestion of the food so that nothing is stored as fat. Oolong also contains caffeine, about 15 to 20% of that found in a cup of coffee, which is another component that aids calorie burning.

Other health benefits linked to oolong include lower cholesterol levels, improved complexion, better immune system performance, and increased levels of antioxidants in the body. Oolong is said to promote healthier bones and is often recommended as a supplement for patients suffering from osteoporosis and other bone diseases. Similarly, some of those same properties are believed to help in the prevention of tooth decay.

While the health benefits of oolong tea can be reduced according to the amount of oxidation it undergoes during the fermentation process, even those with the highest oxidation amount are still believed to be among the most beneficial teas in the world.

Oolong tea carries with it no known serious side effects. But, as with most other nutritional supplements, some minor side effects do occur in people with other underlying issues. Also, moderation is the key principle of consuming any supplement, including oolong tea. Excessive use can result in unintended consequences.

Some of the most common side effects of oolong are restlessness, sleeplessness, jitters, and other caffeine-related symptoms exhibited in those with an underlying caffeine intolerance. For people suffering from heartburn or ulcers, oolong can cause stomach upset because it contains tannin, a substance known to promote the production of gastric acid.

Oolong is known to reduce the body's absorption of vitamin B, can cause allergic reactions, and can interact negatively with some medications. Consumers are urged to consult their physician if they suspect oolong consumption may be causing such problems.

The daily dosage for oolong tea depends on the goals one expects to achieve from consuming it. As a simple dietary supplement to improve overall health, one or two cups per day is generally recommended. Experts normally suggest one cup in the morning and another in the late afternoon or evening.

As a weight loss supplement the recommended dosage is two to three cups per day for a minimum of six weeks. The tea should be consumed immediately after meals for maximum weight loss benefits.

A 2003 review published in the Journal of Medical Investigation highlights the fact that oolong tea consumed in the correct dosage proved beneficial to Japanese women trying to lose weight. The study observed that the women drinking the tea immediately after their meals exhibited increased energy expenditure at higher rates than those drinking green tea or water. This could explain the increased metabolism and subsequent weight loss benefits.

Oolong Tea is one of those rare natural substances with a long, documented history of health benefits. The only caution is to be careful to read all packaging in order to insure you are getting a legitimate product, rather than one with fillers or altogether different ingredients. Use the free supplement finder to locate and compare oolong tea right now!