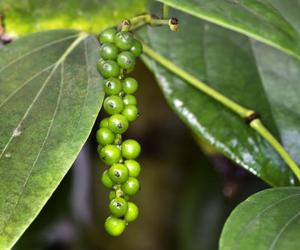 Red, green and pink pepper also come from piper nigrum, but black pepper is the one most commonly used. Black pepper is called the King of Spices. It is a popular spice for cooking and flavoring but also has medicinal uses, from aiding digestion to combating parasites. Pepper oil is distilled from black pepper as well, which is a flavoring agent.

Although black pepper is considered generally safe and is used in a variety of foods, it does cause some side effects and is known to react with several medications.

In the past, black pepper was one of the most sought-after spices on the planet, according to LiveStrong.com. Some people even used black pepper as currency because of its significant value. Black pepper, along with other colored peppers, is made from the piper nigrum plant. The plant ... more

In the past, black pepper was one of the most sought-after spices on the planet, according to LiveStrong.com. Some people even used black pepper as currency because of its significant value.

Black pepper, along with other colored peppers, is made from the piper nigrum plant. The plant has pepper vines that bear berries called peppercorns. The peppercorn berries are dried and ground down to make pepper.

Black pepper may be beneficial for a variety of uses, from a pain killer to anti-inflammatory, and its use dates back more than 3,000 years, according to Bioweb.uwlax.edu, a collaborative website ran by faculty members from 14 University of Wisconsin System universities and centers.

According to the Illinois of University at Urbana-Champaign, peppers have a historical association with treating nausea, improving digestion and working to stimulate the appetite. Black pepper has also been used as an antibacterial agent and for diuretic and anti-flatulence properties.

People in East Africa ate black pepper to repel mosquitoes. An alternative health practice known as Ayurveda mixes black pepper and long pepper with ginger to treat a variety of illnesses, according to HealthLine.com. Black pepper has historically been associated with treating conditions from toothache to paralysis in India.

According to HealthLine.com, recent studies suggest that black pepper may help with pain and Alzheimer's disease. Black pepper oil can also decrease symptoms of withdrawal from smoking and improve the ability to swallow in post-stroke patients.

Piper nigrum can be applied as a topical treatment. Black pepper is sometimes used topically to treat nerve pain and scabies.

Both black and white pepper may be effective as a topical counterirritant for pain.

Piper nigrum leaves and berries contain compounds that provide many important properties, including the ability to inhibit parasites and promoting tissue health, according to Bioweb.uwlax.edu.

Piper nigrum may be beneficial for the metabolism, according to Bioweb.uwlax.edu. Piper nigrum contains piperene, a chemical that promotes thermogenesis.

When the body creates heat, like from breaking down fats and burning calls, it is called thermogenesis. Increasing thermogenesis leads to a greater number of calories burned, which leads to weight loss.

More stomach acid can make it easier for the body to break down foods. Better digestion may relieve intestinal gas and indigestion.

Black pepper can also reduce inflammation, according to LiveStrong.com. Black pepper has anti-inflammatory properties that may be beneficial for several medical conditions.

Black pepper along with turmeric may be effective against breast cancer cells. It can decrease irritation from insect bites and improve conditions like asthma that are linked to an inflammatory respiratory response.

Black pepper contains healthy chemicals called antioxidants, according to LiveStrong.com. Antioxidants fight free radials, which are substances that can contribute to aging and cancer.

Piper nigrum can have a protective effects against serious conditions. According to WebMD, there is some evidence that pepper can protect people from developing colon cancer.

According to LiveStrong.com, there is also evidence that black pepper may help prevent development of the stem cells that cause breast cancer. It may also lead to changes in the brain that reduce risk of seizure.

It also has several phytonutrients and vitamins, such as vitamin A, C and E. Black pepper is a rich source of vitamin K. It also contains folic acid, niacin, choline, lycopene, riboflavin, beta-carotene and thiamine.

Check out the supplement finder to learn more about the above listed vitmains and minerals, and many more!

Extracts from piper nigrum, including black and white pepper, are safe when used as food, according to WebMD. The U.S. Food and Drug Administration classifies black pepper, piperine and black pepper oil as generally safe as food.

Pepper might be safe when used medicinally for most people. Taking pepper orally can also lead to gastrointestinal issues, such as upset stomach. In rare cases, using large amounts of pepper orally can get into the lungs and cause death. Children are more vulnerable.

According to HealthLine.com, inhaling black pepper may lead to respiratory arrest or edema. It can result in death. There may also be a link between ingesting black pepper and nasopharyngeal oresophageal cancer.

As a topical application, black and white pepper are generally safe for adults, but it might not be for children. If entering the eyes, pepper can lead to burning and redness.

Pregnant women should avoid large amounts black pepper. Some evidence suggests that it could contribute to a miscarriage. Pepper may not be safe for topical application on pregnant women's skin.

Both black and white pepper from the piper nigrum plant are known to have mild to moderate drug interactions, according to WebMD. Pepper can act like a water pill and may react with medications changed by the liver.

Taking white and black pepper at the same time as lithium sometimes inhibits the body's ability to excrete lithium. This raises the levels in the body, which could cause significant side effects.

Certain medications are broken down in the liver and changed. Pepper may increase the speed that the liver breaks down the medications and make the effects of the drugs stronger. Examples of drugs changed by the liver include:

A moderate interaction can also occur when taking black or white pepper with drugs moved by pumps in cells, such as P-glycoprotein substrates. Pepper can increase how much of these drugs the body absorbs, which could cause an increase in side effects. Other examples of these medications include: