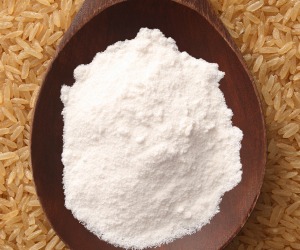 Rice flour has typically been used in baby foods and cereals like Rice Krispies. However, it is also an ingredient in certain types of supplements. Rice flour has been gaining in popularity for use in baked goods. It is also used in some frozen foods like French fries, as well as snack foods like potato chips.

People who are affected by Celiac disease or a gluten allergy cannot have any flour which contains gluten. Rice does not contain any gluten, therefore they are able to substitute rice flour in order to dodge having an allergic reaction. You’ll probably see plenty of gluten-free products in your local supermarket that are made with rice flour.

Overseas, rice flour is a hot commodity. Not only does it prevail in India and Japan, but also in Thailand, Vietnam, Korea, and China, where it has been used for thousands of years.

The Many Uses of Rice Flour Rice Flour is used in many recipes as well as recipes for those with gluten allergies. Cereals such as Rice Krispies and Rice Chex are typically gluten-free and made with rice flour.  However, one should always check the food label before consuming the food ... more

The Many Uses of Rice Flour

Rice Flour is used in many recipes as well as recipes for those with gluten allergies. Cereals such as Rice Krispies and Rice Chex are typically gluten-free and made with rice flour.

However, one should always check the food label before consuming the food just to double check the allergens. Certain products that are made with rice flour may still put you at risk for cross-contamination if they are produced in a factory which also uses other types of flour.

Many food companies, especially cereal brands, are switching their ingredients to be more helpful for those who are prone to gluten allergies. Rice flour is also being substituted for wheat flour in crackers and other varieties of snacks.

Some chefs or cooks may even use rice flour to just add a certain texture or depth to their dishes instead of using the familiar wheat flour. Rice flour is an excellent choice for coatings and breadings because it becomes very crunchy when cooked.

Foods such as pancakes, muffins, and bread can easily be made with rice flour. It is more common, however, to mix the rice flour with other types of gluten-free flours to give the baked goods a more palatable texture.

Rice flour is present in numerous dietary supplements. It is typically a inactive ingredient, and generally makes up most of the capsule that the vitamin or supplement is actually present in.

Now Foods is a well known and reputable supplement manufacturer that has been around for many years. They manufacture certain supplements which are classified as vegetarian or vegan. These give your body the types of nutrients that you may be lacking due to your vegan or vegetarian diet. These capsules and supplements are made with rice flour.

Glutinous rice, which is also known as sweet rice or sticky rice, is also made into flour. Despite its name, glutinous rice does not contain any gluten. It is commonly used to make pastries in Asia.

Though wheat flour has some of the necessary nutrients, rice flour highly surpasses the white flour in the nutritional content. Rice flour can be substituted when baking cookies, making pizza or even with baking muffins.

People newly diagnosed with Celiac disease may believe that it is impossible to eat their favorite foods because of their gluten allergy! However there are many flours on the market today that allow them to do so. In addition to rice flour, some other good ones are corn flour, tapioca flour, coconut flour, and almond meal.

Rice flour is also used to make many cereals, and is becoming more popular everyday because it keeps your cereal crunchy. You probably don’t even realize rice flour is being used in some of these cereals, since they have been around for a long time but only recently reformulated. Life cereal would be a good example of this.

If you have a gluten allergy or similar issue, use the supplement finder to locate supplements formulated with rice flour!