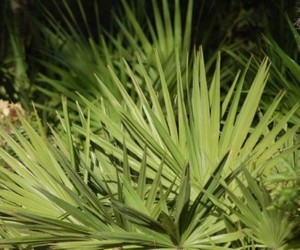 Serenoa repens is indigenous to the southeast coast of America, and is recognized by the name Saw Palmetto. It is made famous by the properties people rely on for numerous conditions and ailments.

Native Americans and Mayans are rumored to have used this supplement to address reproductive and respiratory ailments for decades, but they also used it as a tonic for overall wellbeing. In addition, they supposedly ate the berries for nutrition.

Saw palmetto is recognizable by its yellow flower and dark reddish ash berries in a tree that resembles the palm. The oily substance secreted from the berries is the extract used to make tonics and other forms of saw palmetto supplements.

Saw palmetto is processed by drying the fruit slightly and then mixing it with a solvent like ethanol. It is made up of fatty acids and phytosterols that interact with hormones such as testosterone and estrogen.

Saw Palmetto Benefits The biggest claim about saw palmetto is its affects on prostate health, specifically benign prostatic hyperplasia or BPH. BPH is a prostate condition that blocks urine flow through the urethra in men. This condition causes men to experience painful symptoms. Many men ... more

The biggest claim about saw palmetto is its affects on prostate health, specifically benign prostatic hyperplasia or BPH. BPH is a prostate condition that blocks urine flow through the urethra in men. This condition causes men to experience painful symptoms. Many men are looking for relief from the symptoms associated with prostate cancer, and saw palmetto seems to be the answer.

Saw palmetto contains the plant based sterol ester, beta sitosterol, which is also contained in nuts, seeds and some vegetables. However, saw palmetto contains only about one percentage of beta sitosterol, which has proven to be even more effective than saw palmetto at relieving symptoms of BPH in clinical trials. This nutrient has its own set of benefits, but when taken in conjunction with saw palmetto, men reported their hair grew back after experiencing male baldness in addition to BPH relief.

The use of saw palmetto in women has a different affect. It manages the hormones that may be prone to overproduction. This includes DHT or dihydrotestosterone that in turn controls acne, hair growth and other body functions. Estrogen levels are also managed. This herb is even said to help lactating women produce milk. Reports of lower blood pressure were received, as well as hair growth in alopecia sufferers.

Another use of saw palmetto for women is for PCOS or polycystic ovarian syndrome. Since it manages testosterone levels, it decreases the effects of the overproduction of testosterone in women with this condition. This aid translates to less facial hair and growth in other awkward places. Another inconclusive claim is that it helps with strong menstrual cramps.

Saw palmetto is supposed to relieve asthma, coughs, sore throats, and other respiratory illnesses. Its healing properties are not limited to reproduction and respiration, but it has antiseptic properties too. It is also recommended for:

A recommended dosage for someone with BPH is 320mg in extract form per day. Supplement manufacturers suggest and offer their product in different milligrams distinguishing the many products offered.

One recommends one to two tablets three times per day. Another manufacturer mixes saw palmetto with Korean ginseng, zinc, copper, and pygeum as a masculine formula and recommends two per day.

This supplement is available in the form of tablets, extracts, teas, soft-gel capsules, and traditional capsules. Since oil and water does not mix, the tea form is less effective. There is no real dosage recommendation for women other than what is speculated and suggested on each bottle. The BPH recommended dosage is the only amount studies officially established as effective.

There are no serious concerns about this supplement. Saw palmetto has not presented any fall out by consumers. Several people complained about upset stomach and diarrhea, but that could be due to taking it on an empty stomach. This same group of people also complained of headaches and dizziness as well. Long term use of this supplement has the potential to affect the liver and pancreas adversely.

Some drug interactions might be taken into consideration. Due to the effect on hormone levels, this may not be a good choice in combination with birth control pills or hormone replacement therapy. It is also interactive with blood thinners, and anti-androgens that reduce testosterone levels. The most concern is for the possibility that saw palmetto might interfere with cancer results or PSA levels. PSA levels determine prostate-specific antigens as an early detection measure.

As with any supplement, it is wise to check with your doctor before adding them to your daily prescription. Find and compare saw palmetto sources with the free supplement finder now!