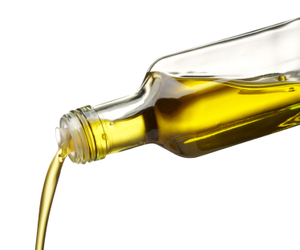 Soybean oil is made from the soybean, a legume that grows in a pod, and is usually labeled as vegetable oil. It has many uses in cooking, frying and baking. Soybean oil may be found in health supplements that are used for the treatment and relief from osteoarthritis, heart disease and high cholesterol.

Soybean oil also has many uses as a bug repellant, as a nutritional additive for people who are ill, and in the printing industry. Soybeans and soybean oils are used internationally as a food staple.

How Soybean Oil is Made Soybean oil is taken from the soybean once the beans have been broken open, heated and rolled flat. The oil is extracted with chemicals and then refined for use in oil blends and vegetable oil. Soybean oil may also be hydrogenated for use in margarine spreads. F... more

How Soybean Oil is Made

Soybean oil is taken from the soybean once the beans have been broken open, heated and rolled flat. The oil is extracted with chemicals and then refined for use in oil blends and vegetable oil. Soybean oil may also be hydrogenated for use in margarine spreads.

Soybean oil is used in frying, though it is not the most desirable of cooking oils for deep frying. Frying food also increases the fat content of the food, making fried food an unhealthy choice. Soybean oil is also used in sautéing and other oil-based cooking methods with healthier results.

The United Soybean Board has been working to grow low-linolenic soybeans to create an oil to use for frying that does not create trans fats. Other “trait-enhanced” soybean oils are raised to be higher in Omega-3 fatty acids or behave like hydrogenated oil without the unhealthy fats.

Soybean oil is also used in baking, mostly in dessert items such as cakes, brownies and sweet breads. The soybean oil helps the ingredients to blend equally and the mixture to expand as it bakes.

Other Uses of Soybean Oil

Soybean oil is used in intravenous feeding drips to provide healthy fats as well as to extend the life of the other contents in the mixture.

Soybean oil is used in inks in printing and oil paints because when it dries it is both waterproof and flexible on the paper.

Soybean oil is also used in bug repellant to reduce the rate at which the repellant evaporates from the skin. The oil allows the active ingredients to sit on top of the skin, repelling mosquitos and gnats with greater effect.

A 2004 study published in the “Journal of Medical Entomology” showed that a mosquito repellant containing soybean oil, geraniums and coconut was nearly as effective in repelling three different species of mosquitos as products containing DEET, a harmful chemical used in most mosquito repellants.

The fats in soybean oil are those that are considered healthy, advises WebMD, because they are the monounsaturated and polyunsaturated fats that do not lead to high cholesterol and heart disease.

The Omega-3 fatty acids from plant sources such as soybean oil have not been studied as extensively as Omega-3s from fish sources. However, soybean oil has no danger of containing mercury as those from fish do. While all fats should be taken in moderation, soybean oil is a heart healthy alternative to other oils that contain saturated and trans fats.

When soybean oil is hydrogenated, such as to create margarine in stick form, those fats in soybean oil convert to trans fats and are no longer a healthy choice. For optimal health, you should only use butter or spreads that have no hydrogenated oils.

Many studies found on the National Institute of Medicine’s website show evidence that a combination of soybean oil and avocado unsaponifiables will have a positive effect on those suffering from osteoarthritis, an inflammation of the joints. There was evidence of reduced inflammation, a lessening of pain and a reduction of pain medicine needed for osteoarthritis sufferers taking the supplement.

Those who are allergic to peanuts, legumes or other soybean products may also be allergic to soybean oil, according to Web MD. Allergic reactions may include rash, swelling, itching and anaphylactic shock.

There are no medical interactions associated with soybean oil. Speak with your doctor and pharmacist before you start any new supplement or medication.

How to Use Soybean Oil

Soybean oil is readily available at grocery stores and supermarkets for general cooking and baking.

Supplements are sold as soft gel capsules at around 300mgs per pill. Follow the manufacturer’s recommendations for dosing amounts and schedules. It usually takes a few weeks to two months for effects to be noticed.