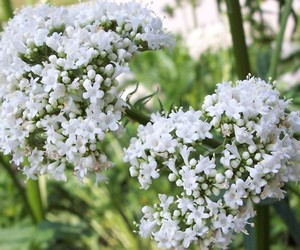 Valerian is a perennial flowering herb from which the nutritional supplement valerian root is made. Used in herbal medicine since the times of ancient Greece and Rome, valerian supplements are made from drying the roots of the plant, grinding them, and putting them into capsule form.

Valerian root was first described by Hippocrates as a remedy for insomnia. While that remains its most common use, valerian is also now used to treat a variety of ailments; although, most studies are inconclusive regarding its effectiveness for any of these.

Valerian is most commonly taken in capsule form when used as a nutritional supplement. It can also be consumed in tea form. Occasionally people talk about adding valerian to bath water as a means of relaxation. Throughout some parts of the Middle East, including Iran, valerian root is smoked or injected as a recreational drug.

Valerian Benefits Valerian root is a mild sedative and is frequently combined with hops, lemon balm, and other natural herbs that cause drowsiness. It is often used to treat insomnia, especially in people who cannot tolerate, or wish not to take, benzodiazepine drugs (narcotic sleeping pil... more

Valerian root is a mild sedative and is frequently combined with hops, lemon balm, and other natural herbs that cause drowsiness. It is often used to treat insomnia, especially in people who cannot tolerate, or wish not to take, benzodiazepine drugs (narcotic sleeping pills).

It has also been used in this manner to assist people who are trying to stop taking or reduce their intake of benzodiazepines. There is some scientific evidence to support valerian root’s use in this manner although further research is needed.  Valerian is much weaker than prescription sleep medications and needs to be taken for several days or weeks in order to build up enough in the body to be effective.

There are several other uses for valerian root that are common, yet not supported by a lot of evidence scientifically. Valerian has often been described as a mood stabilizer and has been used in this manner to treat disorders such as stress, anxiety, depression, and hypochondria. Additionally it has been considered a muscle relaxant and anticonvulsant and used in patients with epilepsy. Several other possible uses are listed below.

Valerian is generally considered safe in small amounts such as those found in food and beverages. Medicinal amounts are considered possibly safe, although in smaller dosages side effects are rarely seen.

When consumed in larger doses people have shown signs of being overly excitable, disoriented, dizzy, and very tired. Some people experience a feeling of sluggishness that continues into the next day after taking valerian root. When you first take valerian it is recommended that you refrain from driving until you know how it will affect you.

In some patients taking valerian for symptoms of anxiety valerian has been known to cause agitation, headaches, and night terrors. This may be due to the fact that some people do not have the proper digestive enzymes to break the herb down.

Valerian can also cause more significant side effects when taken for a long duration. These include chronic stomach aches, apathy, and depression. In rare cases allergic reactions have been reported causing skin rashes, hives, and difficulty breathing.

Valerian root should not be combined with other depressants such as alcohol, benzodiazepine drugs, barbiturates, and opiates because both slow down the central nervous system. Additionally, for this reason, valerian supplements should not be taken within two weeks of surgery because of the dangers of combining it with anesthesia.

There is no conclusive evidence to show that valerian root is safe during pregnancy and for infants. Therefore, it is recommended that women who are pregnant or breast feeding avoid taking the nutritional supplement.

It is difficult to determine an exact dosage due to the fact that there is no standardization for valerian root consumption. Typical doses of the herb itself range from two to ten grams per day. This equates to the following common dosages listed on product packages when using valerian to treat insomnia.

Due to the fact that dosages differ widely and there are several possible drug interactions, it is recommended that anyone considering taking a valerian root supplement consult their physician first.  Use the free supplement finder to locate and compare valerian supplements now!