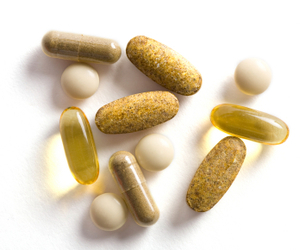 VegPeptase 2000 is a trademarked variation of a substance known as vegetable peptase. Peptase is an enzyme included in a class of enzymes known as proteases, whose function is to break down large protein molecules into smaller ones known as peptides.

The designation "vegetable" simply refers to the source of the peptase used by the manufacturer. You'll find the trademarked version as an ingredient in some bodybuilding supplements.

Animal Pak lists VegPeptase 2000 as an ingredient in several of their supplements along with a note at the bottom of labeling which states that the substance is a blend derived from various natural sources. Beyond this, not much else is known.

VegPeptase 2000 Benefits How VegPeptase 2000 effects the use of anabolic steroids is not clear. But we do know that protease enzymes are very beneficial in helping the body better utilize proteins. That's because, in their natural state, protein molecules are usually too large to be proper... more

How VegPeptase 2000 effects the use of anabolic steroids is not clear. But we do know that protease enzymes are very beneficial in helping the body better utilize proteins. That's because, in their natural state, protein molecules are usually too large to be properly digested.

Protease enzymes go to work on these large molecules and break them down into smaller ones known as peptides. It is these peptides that the body utilizes for normal functioning.

Proteins are essential for building muscle mass and strength. Therefore, it stands to reason that any substance that would encourage the breakdown of protein molecules so they can be better absorbed is one that would help bodybuilders.

Research for this article did not uncover any standalone VegPeptase 2000 supplements. Furthermore, there aren’t a large number of dietary supplements using it as an ingredient. It seems to be limited to just a few manufacturers like Animal Pak.

That said, there are a larger number of dietary and nutritional supplements using non-proprietary vegetable peptase as an ingredient. In every case the substance is marketed along the lines of helping athletes build muscle mass and perform better.

Because of its function, vegetable peptase is almost always as an ingredient in pre-workout formulas. These formulas are used to prepare the body for strenuous exercise so that it can better use amino acids and proteins.

When taken according to manufacturer instructions, these pre-workout formulas help the athlete get the most out of his daily workout routine in terms of increasing performance, maintaining endurance for longer amounts of time, and increasing muscle mass.

Protease enzymes are used extensively throughout the bodybuilding world for obvious reasons. To date there have been no documented serious side effects linked to using protease enzymes or vegetable peptase in moderation.

At the same time, significant research has not been conducted to determine that these substances are completely harmless. Therefore, manufacturers recommend that pregnant and nursing women not use such supplements.

There have been some documented cases of gastrointestinal discomfort among those who have taken excess amounts of supplements containing vegetable peptase. The side effects are mostly minor and include gas, bloating, upset stomach, and varying levels of stomach cramps.

Users should be very cautious and follow manufacturer instructions when taking a supplement containing protease enzymes.

When it comes to dietary supplements aimed specifically at athletes, there are far too many to include in a single formula. Therefore manufacturers recommend the practice of stacking, which simply means to take several different supplements at different times in order to maximize their benefits.

Supplements which contain VegPeptase 2000 or a generic vegetable peptase are generally stacked with protein powders, energy drinks, and carbohydrate supplements. How well stacking may work depends on the individual users.

For most athletes it requires a time of trial and error to determine just how to correctly stack each supplement. Because of the nature of stacking it is difficult to pinpoint the exact benefits an individual may get from VegPeptase 2000.

More often than not benefits are realized from the entire supplement containing VegPeptase 2000 rather than just that one ingredient itself.

Before new athletes begin adding supplements to their daily routine they should be careful to make sure they know exactly what they're doing. Consulting a doctor or a professional trainer is the wisest course of action.

As always, athletes who experience adverse side effects when taking supplements should cease using them and consult a doctor. Even though VegPeptase 2000 and many other supplement ingredients are deemed a generally safe, there are always risks associated with them.

To locate and compare products with VegPeptase 2000, use the supplement finder now!