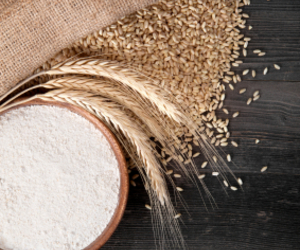 In simplest terms, wheat flour is the powder which resulting from grinding up wheat grain as finely as possible. Wheat flour is broken down into nearly a dozen different categories. The most popular wheat flour products are white flour, bleached white flour, and all purpose flour.

Wheat flour is not necessarily the same as whole wheat flour, as the latter uses the entire grain while the former uses just the endosperm. Often times whole wheat flour is touted as being healthier because of its whole grain properties, so consumers looking for that type of flour should not confuse the two.

Wheat flour is not normally used in traditional nutritional supplements; however, whole wheat flour may be used to add nutrition and fiber to breads, cereals, and energy bars.

Common Types of Wheat Flour All purpose flour is a combination product using a variety of both hard and soft wheats. According to a fact sheet published by Ohio State University Extension the "harder" the wheat, the more gluten it potentially contains. All purpose flour is the most com... more

All purpose flour is a combination product using a variety of both hard and soft wheats. According to a fact sheet published by Ohio State University Extension the "harder" the wheat, the more gluten it potentially contains.

All purpose flour is the most common flour on the American market because it is an inexpensive alternative to finer baking flour products. Although all purpose flour doesn't have the same quality and consistency as baker's flour, it is suitable for most home baking needs.

If you have bleached white flour in your cupboard it is essentially the same as all purpose flour except that it's been altered to make it appear white. Unbleached flour has more nutrients.

One of the reasons why nutritionists don't have a very high opinion of standard wheat flour is the fact that it has very little nutritional value. Even before it is bleached, regular wheat flour has only a moderate protein content and little else to offer otherwise.

When the wheat flour is bleached, the little nutritional value that existed is pretty much wiped out. That's why it's suggested that for nutritional benefits we would be much better off eating two slices of whole wheat bread on a daily basis instead. A study offered by the Journal of the American Medical Association in 2002 says as much.

Studies to this effect have been conducted since the late 1990s, all with similar conclusions. However, it should be noted that eating two slices of whole wheat bread each day is not enough to help regulate your cholesterol levels!

Other benefits of using whole wheat flour include better control of body weight, a reduced risk of heart disease, and regulation of blood sugar levels. Standard wheat flour and enriched flour are not the same as whole wheat flour. In order to know the difference, you should check ingredient labels to make sure that the flour used is listed with the word "whole" as the first word in the phrase.

That's how the FDA has determined to require manufacturers to indicate the difference. In other words, whole wheat flour will be labeled with that wording. If the package says "whole flour" or "wheat flour" that does not mean it is whole grain!

Many flour producers do offer enriched forms of their product with added proteins, minerals, and vitamins. These enriched flowers are designed to give consumers an alternative with at least more nutritional value than standard wheat flour.

Oftentimes flour is enriched after the bleaching process in order to make up for the lost nutrients. While enriched wheat flour is certainly more nutritious than bleached white flour, it still does not contain the health benefits of whole grain wheat flour.

People suffering from celiac disease will often have difficulty with products made from wheat flour. This is especially true when using whole wheat flour due to its high gluten content.

People suffering from celiac disease would do best to avoid all flours produced from wheat, spelt, barley, or any other grain which contains gluten. They should stick with gluten-free oat, corn, tapioca, or rice flour. These types of flours have no gluten content at all.

If you are looking for the right supplement to help you achieve your fitness goals, use the supplement finder now!