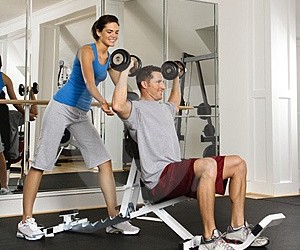 Ipriflavone is a synthetic supplement that mimics isoflavones. Soy is the substance from which Ipriflavone is made. Ipriflavone was created for the first time in 1976 and sold as an anabolic agent to body builders.

In terms of the use of Ipriflavone supplements for weight trainers, there is not much scientific evidence that it has the benefits suggested by companies that manufacture and sell this as a product.

Ipriflavone and Unproven Benefits Another unproven benefit of Ipriflavone is that it can help athletes who participate in distance sports to last longer because it supposedly increases cardiovascular capacity. Again, studies conducted to produce this benefit were done on lab rats and this ... more

Another unproven benefit of Ipriflavone is that it can help athletes who participate in distance sports to last longer because it supposedly increases cardiovascular capacity. Again, studies conducted to produce this benefit were done on lab rats and this benefit has not been shown in human study.

Lastly, there are some companies that sell Ipriflavone as a metabolism booster. Again, there are no studies to back this up and with plenty of products like creatine supplements available that actually do boost the metabolism, it is suggested that you don’t use Ipriflavone for this purpose.

Believe it or not, Ipriflavone is one of those supplements that have been proven to have other benefits. The reason that real scientific study has been conducted on Ipriflavone is because it was patented as an anabolic agent. This means that drug companies are able to patent it as something else and with different mechanisms of action to allow for prescription doses to be prescribed.

One of the first proven benefits of Ipriflavone is for osteoporosis, specifically in postmenopausal women. In order to achieve the most benefit from taking Ipriflavone for this purpose, it has to be combined with 1000 mg of calcium a day.

Not only does this stop the progression of osteoporosis but it has also been shown to prevent high risk women from having osteoporosis at all. When estrogen is added to the combination of Ipriflavone and calcium, the results are even more improved!

In addition, Ipriflavone can reduce the pain associated with osteoporosis. It is important to note that people taking Ipriflavone noted a significant decrease in pain and associated the relief to be equivalent to taking certain prescription pain killers.

In general, it is believed that Ipriflavone will reduce bone loss in people with conditions that cause bone loss. Because of this Ipriflavone is often marketed as a product good for bone health for weightlifters. Although there are no studies to bear this out, it is not an unreasonable assumption about Ipriflavone.

There are currently studies being conducted on the benefit of Ipriflavone on other bone conditions and bone pain. Some evidence exists that suggests that Ipriflavone can be used for far more than it is currently, but time will tell based on the release of new data.

Ipriflavone: Side Effects and Interactions

The most common side effects of Ipriflavone are:

The side effects of Ipriflavone are general mild and easy tolerated, most go away after the body adjusts to the Ipriflavone intake.

It is very important to note that Ipriflavone should not be taken if you have an immune deficiency or autoimmune diseases. Ipriflavone reduces the white blood cell count if taken for periods longer than 6 months, this can be dangerous for people with weak immune systems.

There are also several medications that interact with Ipriflavone, so avoid taking this supplement if you are taking:

There are many other drugs that Ipriflavone interacts with so if you are taking any medication or have any medical conditions, talk to your doctor before taking it.

Ipriflavone is mainly sold in pill form. You will find that because of the studies regarding Ipriflavone and osteoporosis that some supplement companies combine Ipriflavone with calcium in order to achieve positive results. Just be aware that in studies unless the calcium was at least 1000 mg, it showed no proven benefit.

The cost of Ipriflavone ranges from $7 to $90. In most cases Ipriflavone is combined with other supplements to achieve multiple results. Use the supplement finder to source the best Ipriflavone for your nutritional needs today!