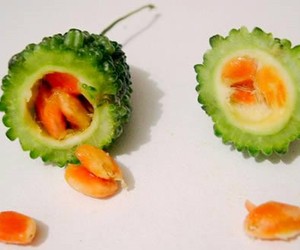 The Momordica Charantia is a vine fruit that is most commonly known as Bitter Melon or Bitter Gourd; but has also been called Karela, Fu Gwa, and Mara as well as a handful of other names according to the region in which it is used. Momordica has been used for centuries around the world for a wide range of medical conditions, and has shown serious improvement in achieving stabilization and reduced symptoms in autoimmune disorders, type 2 diabetes, and psoriasis, as well as others.

Momordica is one of the most bitter fruits available and is found growing in tropical and sub tropical regions around the world. Both the leaves and the fruit of the Bitter Melon is used in creating supplements in the form of powders, juices, pills, injections, etc. The positives of Momordica Charantia are that it is extremely rich in beta carotene, in vitamins A, B1, B2, C, and Iron.

Momordica Defined Momordica Charantia, or bitter melon, refers to a type of vine fruit that grows predominantly in tropical regions, such as: the Caribbean, Asia, and Africa; and is one of the most bitter fruits in existence. Though well known as an active ingredient in various cuisines al... more

Momordica Charantia, or bitter melon, refers to a type of vine fruit that grows predominantly in tropical regions, such as: the Caribbean, Asia, and Africa; and is one of the most bitter fruits in existence. Though well known as an active ingredient in various cuisines all over the world, Momordica is most commonly associated with its medicinal properties for a wide variety of autoimmune disorders and health conditions. Eastern medicine has long included the benefits of the Momordica Charantia, or bitter melon, fruit in assisting their people with everything from cholera to psoriasis and cancer; but it is only recently that the medicine has received attention in the western world.

So, who should take Momordica, and what ailments is it best suited towards? While no medicine is a cure all; studies have shown time and time again productive and measureable results in improving the symptoms associated with the following conditions:

Though there are a number of health benefits to taking Momordica or Bitter Melon in its fruit, juice, or supplement form; anyone considering using the supplement should know how to properly take it, as well as the possible side effects included in its consumption.

It is advised to always consult your physician prior to taking a new supplement, as well as to follow the dosage information on the particular product’s guidelines. Since Momordica comes in a variety of supplementation forms like juice, powder, pill, and fruit, the dosage will vary accordingly.

Pregnant women or those of childbearing age should use caution when using Momordica, as it can act as a form of birth control. Moreover, children should not use Momordica either, as there have been complications.

The most common side effects attributed to taking momordica is digestion problems to include abdominal pain, bloating, and diarrhea; but these should only occur is one has overdosed on the medication. Compare nutrition options and momordica form and sources with the free supplement finder now!